Lavaliere is a French word for an ornamental pendant worn on a chain around the neck. Years ago, bulky lavalier mics hung around the neck on a necklace. Today a lavalier is a tiny, unobtrusive mic and is typically attached to the clothing or the body of the talent.

Lavalier (lav) microphones are great problem-solvers and can be very helpful tools. When utilised properly a lav can offer great usable audio. The advantage of lav mics is that they help isolate the voice from the background. Lavs are also good solutions for locations that are difficult or impossible to boom. In other cases, such as presentations, reports and interviews, they are the best solution. Lavs sound the best when they are placed on the outside of the item of clothing in the center of the chest.

However, in drama productions, the lav needs to be hidden from the camera. In these cases, the production must usually sustain the illusion that the audience is watching the characters live out their lives. A visible mic would destroy that illusion in the same way that an accidental wide shot would show that the characters are actually on a set. The challenge lies in hiding the mic from the camera’s eyes. This introduces new obstacles including clothing noise and muffled sound.

The greatest challenge with lavs is the clothing noise. Anytime you place a lav under clothes, you will muffle the sound. This is because higher frequencies are weaker than lower frequencies and are easily absorbed by clothes. Hiding lavs under clothing results in a noticeable loss of sibilance. To correct this loss of sibilance, some lavs have an increase in this spectrum to bring presence back to the voice. When a lav is hidden underneath, all sorts of additional problems are introduced. Items of clothing physically rubbing against the mic or mic cable cause contact noise. To fix this, use special mounts that shield the lav from rubbing against them and tape down the mic cable so that it doesn‘t transmit contact noise to the mic. Clothes or costumes cause movement and certain types of fabric create more noise than others, jewelry, in addition, also creates noise. Lavs always need strain relief to protect the mic and to reduce the handling noise. It is vital to have a loop of cable close to the mic head that serves to block cable noise and vibration. Colored lav mics and cables can help them to be concealed from the audience. Windscreens are a must when working outdoors. There are plenty of different types that have their own individual strengths and weaknesses.

Another challenge with lavs is when the actor turns his head. This can cause dialogue to fall off-mic. If the actor looks down at his chest, his dialogue will sound as if he is speaking directly into the microphone. Hard surfaces can create harsh slap-back or echoes, if the talent leans over these surfaces while wearing a lav. If the surface is out of the camera’s view, place a piece of fabric or other absorbent material on it to reduce this effect.

When you place a lav on an actor’s chest, you may form an acoustic shadow originating from his chin. The sound waves do not reach the lav directly. As a result, the voice will sound duller and flatter than if the lav is in direct sight of the mouth. If the lav is placed too close to the neck, the mic will sound muddy and artificially bass-heavy. If the mic is too far from the mouth, the mic can sound thin and weak. Most lavaliers have an omni-directional polar pattern that picks up sound coming from virtually all directions. They can act as a PZM boundary mic using the talent’s chest as the soundboard and give a close perspective, which can make sound claustrophobic as lavs don’t have the same natural sound as a boom. Placing the lav lower can give the mic more openness. Low cuts can be used to help roll off lower frequencies on lavs that are placed on excessively bassy chests. Mounting a directional lav is much more critical than an omnidirectional one. A directional lav needs to be pointed at the mouth.

When you are ready to mount the lav, have all of your equipment with you. There are plenty of accessories that can be included in a kit. (Vampire clips, gaffer tape, medical tape, lav bullets, wireless pouches, windscreens, undercovers, overcovers, top sticks etc.) It is crucial to understand the action of a scene to decide where to hide the lav, cables and transmitter - a device that sends the wireless signal to a receiver tuned to the same frequency. Transmitters connected to a lavalier and worn by the talent are called body packs. The same issue of hiding the gear relates to transmitters. Some body packs have a removable belt clip that allows them to fit in a transmitter pouch and wrap the strap around the waist, underneath the shirt. You can also place the strap around a thigh or an ankle.

While there is usually only one boom mic on the set, it is very common for multiple lavs to be used at the same time. This can cause phase cancellation issues when the lavs are mixed in one track. To prevent this from occurring the active lav should be at least three times louder than other mics in close proximity. For this purpose an automix option in recorders is helpful. In post production there is a great tool plugin from Sound Radix called Auto Align Post that solves the phase shift issues of ISO tracks.

Working with lavs takes practise and creativity. Understanding lav placement and having a good bag of mounting accessories will help prepare you for whatever challenge you face. Be aware of personal privacy issues when placing microphones on talent. Be sure to use headphones to monitor the audio and listen specifically for noise generated by clothing coming into contact with the mic. And finally - be respectful of private conversations, especially if the mics are being sent to the Comtek sets of other crew members. (Be sure to mute the channel in appropriate moments).

In general the first decision is about whether we need to hide the gear or not. There are plenty of occasions such as solo audio, off screen recordings or talents filmed from the back, video interviews, educational programmes and video conferences when we can expose the microphone and get good sound. For these situations it is possible to use the headset or mounting clips that we attach to the clothes. When we shoot with picture, be aware of all visible parts and install them nicely. Hide the cables and the transmitter, the visibility of these parts doesn’t affect the quality of sound. For hiding the lavalier the situation is more complicated. Techniques and accessories which are used will mostly depend on the type of clothes the talent is wearing and whether we mic men or women.  Accessories have to be chosen depending on the type of mic as well.

Vclip Vampires are a great solution for shirts and casual clothes. Pros - very fast mounting. You just place the mic in the clip and attach it to the clothes. Cons - be aware of very sharp needles that might hurt and they might be visible. It is r ecommended to fix the clip with some tape.

A popular and universal technique that uses Ursa tape or another smooth tape which consists of two pieces of moleskin - a small and large piece. To avoid any residue being left around the microphone when you remove the moleskin it is recommended that you place a small piece of Transpore surgical tape around it before making the sandwich. This technique can be used on clothing. 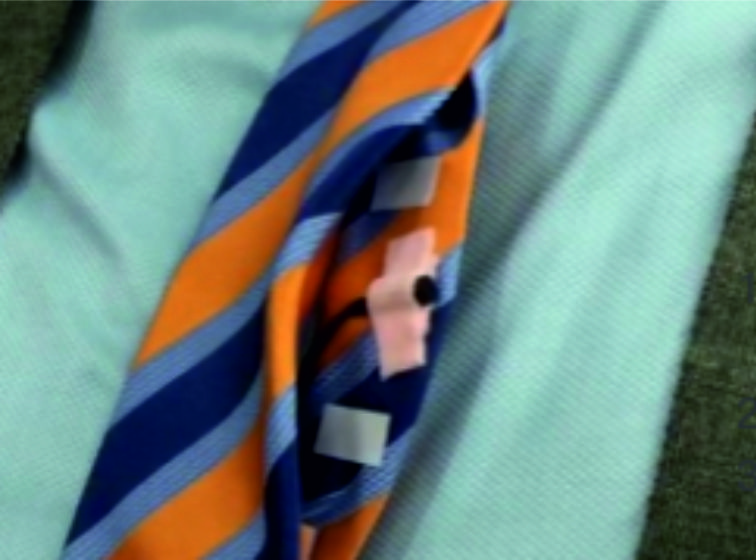 Pros - they don't leave any residue and as it is hypoallergenic it is possible to use them on the skin. Undercovers are the perfect solution to completely hide lavalier microphones. Used with the included Stickies, these soft, fabric discs are designed to minimize the sound of clothing movement while providing protection from light wind. 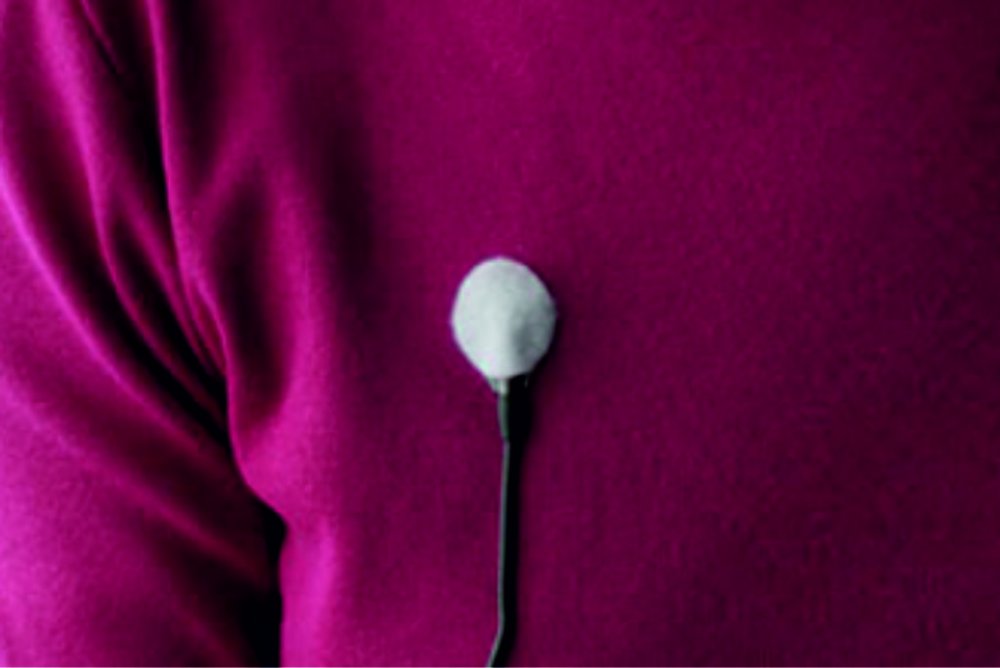 Double sided tape applied to the back of the holder that is placed behind the seam of the t-shirt.

Be aware that printed areas on t-shirts block the sound. It is better to attach the accessories in places where there is no print.

Place the lav between the buttons. Use vampire, concealer, moleskin sandwich, tape triangle or a special shirt holder. 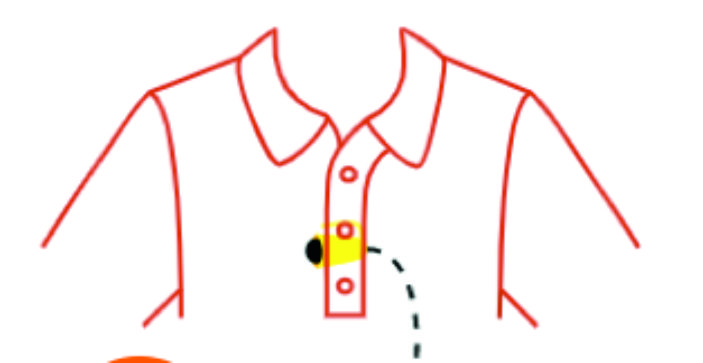 Slide the holder over the microphone and place them on the center core of the bra. It doesn’t damage fabric and can be self applied by the talent. Bone bras might make a noise. 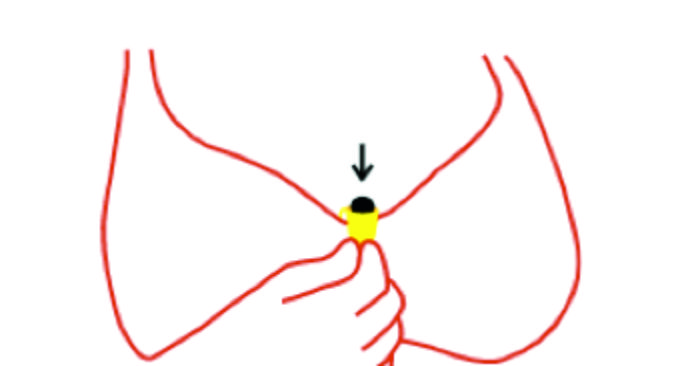 The best hiding place is in a knot. Lav concealers might be used or special tie holders (hide a mic). Feed the microphone from the back of the tie down through the knot, apply the tie holder or concealer or pic hush lab quieting sleeve and push back up into the knot. Good sound results are provided by attaching the lav on the bottom of the cap flap. Be aware of their visibility and wind noise.

A good option might also be to attach the mic directly to the chest. Attach straight to the skin with transpore tape, skin prep wipes make the skin sticky. Rycote undercover or B-flex is a good accessory for this purpose. 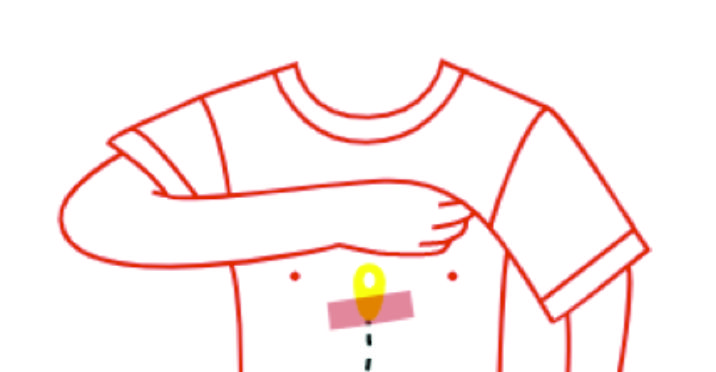 In difficult conditions such as tight attire or wearing a bodysuit, sometimes a good option is to place your lavalier microphone in hair or in a wig. It is possible to hide a mic in hair or in a wig using a clip. With Hide-a-mic Clipz you can mount your microphone in an easy, safe and quick way. Clipz is a regular hair clip that is provided with an elastic band and a piece of rubber for extra security. There are three clips in a set. One to mount the microphone and two to guide the cable to the back of the head.